Providing energy security has multiple dimensions and is relevant to both on-going operations and long-term investment plans. Generation units from the Conventional Generation, District Heating and the Renewables segments are deployed in ensuring energy security. The Distribution segment also plays an important role.

The deployment of generation units in the National Power System depends on energy demand, which fluctuates around the clock and changes seasonally. The Transmission System Operator issues work or stand-by orders to generation units in accordance with the rule that units with the lowest variable cost are deployed first.

In this case, renewable installations have priority. Their use, however, is variable both throughout the year and also throughout the day. Therefore, conventional power plants remain the basis for the NPS and at any time the Transmission System Operator must have sufficient power to guarantee uninterrupted electricity supplies to Polish enterprises and households.

Due to the deteriorating conditions for the operation of conventional power plants, the Capacity Market was introduced, which entered into operation from 2021. If it had not been introduced, the power plants generating losses would have to be closed, which would be unacceptable from the point of view of the stability of electricity production in Poland. Thus, a two-way commodity market was created with the mechanism – power plants sell not only the electricity produced, but also the capacities.

In addition, remuneration for new or modernised units is lowered by the amount of public aid granted to investments. PGE minimalised the risk that capacity market revenues will be significantly curtailed because of public aid.

As a result of the above auctions, the PGE Group concluded agreements, securing a revenue of more than PLN 2.5 billion per annum during the next 5 years. Multiyear auctions concern new units (at Opole, Turów and Dolna Odra power plants) or modernized ones. Low-emission units (like Dolna Odra) benefit from the extension of the contracted capacity supply period by 2 years.

PGE Group’s generating fleet is distributed throughout the country, which is why we are an important partner for the Transmission System Operator. The operator’s role is to balance the system, i.e. to match demand for electricity with electricity supply. The most important services provided by PGE Group to the Transmission System Operator include:

PGE Energia Odnawialna’s pumped-storage power plants played a key role in balancing the Polish energy system following the failure of a switching station in Rogowiec owned by Polskie Sieci Elektroenergetyczne (PSE). On Monday, 17 May, at approx. 17:00, during peak demand for energy, pumped-storage plants Żarnowiec, Porąbka-Żar, Dychów and Solina delivered more than 1.5 GW of capacity to the grid.

– This was an exceptional situation in which all 15 hydrosets at PGE’s pumped-storage power plants worked at full capacity. Such a significant intervention was necessary because due to a failure at the PSE Rogowiec switching station the Polish power system suddenly lost approx. 3.6 GW in capacity from the Bełchatów power plant – said Marcin Karlikowski, president of the Management Board of PGE Energia Odnawialna.

Several minutes later, pumped-storage plants Żarnowiec, Porąbka-Żar, Solina and Dychów filled 40% of this gap. Later, the scale of the intervention was smaller and energy shortages were covered by capacity reserves available at thermal power stations (so called spinning reserve) and emergency imports from abroad, i.e. from the Czech Republic, Slovakia and Germany.

The power station in Żarnowiec played the largest role in balancing the system. On Monday, 17 May, at approx. 17:00 it supplied 745 MW to the grid. Intervention work performed by ESP Porąbka-Żar (541 MW), ESP Solina (185 MW) and ESP Dychów (75 MW) was also of considerable importance.

Pumped-storage power plants are intricate hydrotechnical objects. Their task is not so much electricity generation but rather performing regulatory and intervention functions. The pumped-storage plants in Żarnowiec, Porąbka-Żar, Solina and Dychów are energy storage units that are used, for example, in crisis situations such as the switching station failure in Rogowiec.

Pumped-storage plants are built in between two reservoirs – upper and lower. During low demand for electricity, e.g. at night or in the summer, water is pumped from the lower to the upper reservoir. During peak hours, this process is reversed.

The main advantage of pumped-storage power stations is the ability to balance capacity in the power system. This is important because it is not always possible to precisely predict demand. Importantly, this type of power station is able to respond immediately – within 2-3 minutes – to sudden changes in the energy system. They are able to in-take excess capacity from the system in times of over-supply and deliver capacity during increased demand.

These revenues constitute stable part of the Group’s revenues, and with the launch of the capacity market, their role increases even more. Thus, PGE’s exposure to the electricity market will become relatively lower.

Delivering electricity to customers is no less important than producing it. As Distribution System Operator, we are responsible for the reliability of energy supplies in the eastern and central parts of the country. We deliver energy to end customers over high-, medium- and low-voltage grids. Ensuring energy security means, above all, continuously maintaining the distribution network in proper shape, conducting essential modernisations and immediately removing failures caused by forces of nature. We want interruptions in energy supply to be as short and infrequent as possible. The quality of distribution services is measured using generally accepted indicators – SAIDI and SAIFI:

The President of the Energy Regulatory Office requires distribution system operators to systematically improve quality indicators, tying this to the level of regulated revenue. The tariff process includes the option to adjust network operators’ remuneration due to objective difficulties caused by weather conditions.

In 2020, we improved our SAIDI and SAIFI indicators. On the other hand, the process of connecting new customers to the network slightly extended, which on average lasted 206 days.

In May 2021 the Ministry of State Assets presented a draft document entitled „Energy sector transition in Poland. Carve out of coal-based generating assets from companies with a State Treasury shareholding.”

According to the draft, the carve out process will consist of the State Treasury buying all assets related to electricity generation in hard coal and lignite-based power plants, including related service companies, from PGE S.A., ENEA S.A. and TAURON Polska Energia S.A. In connection with the indivisibility of lignite-based energy complexes, the acquired assets will also include lignite mines. Assets related to hard coal mining will not become a part of the entity operating coal-based energy generation units. As regards heating assets, because of their planned modernisations in the low- and zero-carbon direction, they will not be included in the carve out. The State Treasury will subsequently integrate the acquired assets into one entity. PGE GiEK S.A. will be the integrator. The integration will consist of merging the companies acquired by the State Treasury or contributing them to PGE GiEK S.A. via a capital increase. PGE GiEK S.A. will be re-named as Narodowa Agencja Bezpieczeństwa Energetycznego S.A. (NABE). NABE will be a self-sufficient entity that will carry out replacement and modernisation investments that are necessary to maintain the efficiency of its coal units. The transaction will follow relevant business and economic analyses, including due diligence and valuation of selected assets. Because of the generating companies’ debts toward their parent entities, the settlement of this transaction will be the subject of detailed arrangements between the State Treasury and the existing owners.

According to the draft, once the coal assets are carved out, the energy groups will focus on implementing low- and zero-carbon investments, while NABE, operating as an entity wholly owned by the State Treasury, will be the owner of coal-based generating assets. NABE’s role will be to ensure the essential balance of capacity in the energy system and will be limited to essential replacement investments and a gradual phase-out of coal units as low- and zero-emission capacities gradually grow, thus ensuring the state’s energy security.

The concept to establish NABE is beneficial for companies whose core generating activities are based on coal and whose strategic direction is to reach climate neutrality, as is the case with PGE Group. The construction of new generating units entails large capital expenditures. Achieving the targets set in „Poland’s energy policy 2040” will not be possible without energy groups with a State Treasury shareholding. Their role is crucial in implementing investments in stable gas sources in the locations of the existing coal units. The active participation of energy groups will ensure an effective transition for the sector and guarantee that Poland will play its part in fulfilling the EU commitments to reduce emissions. 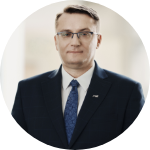 Paweł Cioch
Vice-President of the Management Board for Corporate Affairs

Financial institutions are providing financing in line with the European Green Deal. This means that owning coal assets will make it more difficult to secure funding. However, we do not want any of the coal regions to become a victim, and we are able to avoid this. This is why we want to shift away from coal gradually and in a sustainable manner.

Moreover, a change in the policies of financial institutions, which are cutting down on debt financing for entities involved in energy generation in coal units, means that energy groups are finding it difficult to raise capital even for developing „clean” energy. Maintaining the current high exposure to coal-based energy thus reduces investments in the development of low- and zero-carbon capacities and will therefore delay the energy transition in Poland.

The carve out of coal assets into a separate entity (NABE) will make it possible to reduce regulatory and climate risk for those companies and will significantly raise these companies’ capacity for investments, including in new wind farms, PV farms, gas assets and energy storage systems, as they will have access to a wider and more attractive offering from financial institutions, which is unavailable to companies that are weighed down by carbon footprint. Greater debt financing capabilities on the best possible terms (e.g. green bonds, ESG-linked bonds) will help to accelerate investment projects, with a lower equity exposure.

This solution will contribute toward achieving the energy transition objectives and at the same time will maintain a sufficient capacity reserve in the national power system based on the existing coal units. Workers at the units that will eventually go to NABE will also benefit from job security.

According to the draft, the process of forming NABE and transferring the coal assets will finish in the third quarter of 2022.

Seeing the need to coordinate work on the planned process, on July 23, 2021 PGE, ENEA S.A., TAURON Polska Energia S.A., Energa S.A. and the State Treasury executed an agreement regarding cooperation on the carve out of coal assets and their integration in NABE.